The knee is the largest joint in your body and it is susceptible to injury. Because the knee is a complex joint, made up of many parts, there are numerous things that can go wrong. Knee damage is commonly caused by injuries to the joint. 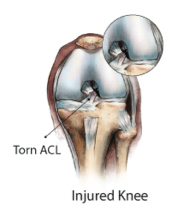 The Anterior Cruciate Ligament (ACL) is one of the four main ligaments in the knee. The ligament connects the thigh bone to the shin bone, keeps the knee from hyper extending, prevents anterior dislocation at the tibia, and stabilizes to help prevent unnatural movement in the joint. If the knee is twisted, bent side to side, or hyper extended during physical activity the ACL can be injured. Contact sports involving rapid twisting movements may place harsh force on the knee, which can lead to injury.

Symptoms of a torn ACL will usually begin with swelling of the knee immediately after injury or within 24 hours. An ACL tear may cause a loud popping or cracking sound at the time of the injury. There may be some pain at the time of the impact, which over time may be felt in the calf region. The patient may feel some instability of the joint, perhaps creating the feeling of the knee “giving way.”

A PCL injury is a less common occurrence than that of an ACL injury. This is due to the thickness and strength of the PCL. However, the most common way in which the PCL is injured is by direct force to the front of the knee, when it is bent. The PCL can also be injured by a direct blow to the outside of the knee joint, such as those that occur during soccer or football. 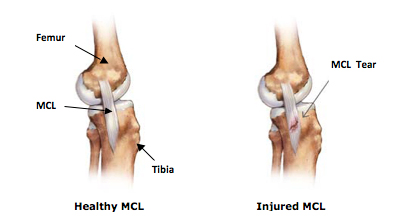 A torn meniscus usually occurs when the knee is rotating while it is bearing weight. This type of injury often occurs in field sports such as soccer and football. 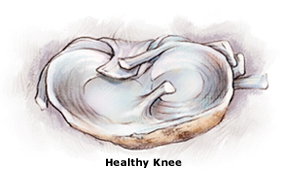 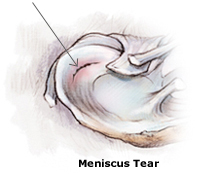 An injured or torn meniscus causes mild to severe pain depending upon the position of the leg and the extent of the tear. Swelling is common at the time of injury, but can develop much later. Many times, an injury to the meniscus causes a pop sound, or the knee may lock, or feel weak.

Cartilage acts like a natural shock absorber, preventing both bone on bone contact and providing a smooth, pain-free surface for the bones to glide against. Because cartilage does not have a blood supply to help repair damage, it may not heal quickly or at all. One of the most common and serious types of damage is to the articular cartilage that is between joints.

Symptoms of this articular cartilage damage include swelling, joint pain, stiffness, decreased range of movement and joints that lock or catch.

"Recent dive trip to Sulawesi, Indonesia eight weeks after my hip replacement. I can say that I had no problems whatsoever diving with this new hip. Many thanks to Dr Humbert for doing such a good job on me."

“My recent hand surgery has not only made my job as a teacher much easier each day, but I can enjoy playing with my new Grandson without pain! Thank you Dr. Sagini.”

"Back to skiing after my knee replacements. Thanks Dr. Humbert."

“Thanks to Dr. Sagini,
I am back to water exercises after my shoulder replacement”.

“I had my knee done so I could sail every day the sun is out and there is no ice on the water. Thanks Dr. Humbert”

"I have hiked this most beautiful place 15 times and Dr. Humbert's joint implant of my left hip enabled me to continue my love of hiking my favorite place. Thank you."

"I was suffering extreme arthritic pain in my back and legs every day until Dr. Eichten replaced both hips over an 18 month period. I was able to successfully resume my culinary career, and the excellent work of Dr. Eichten made this all possible. Most excellent!"